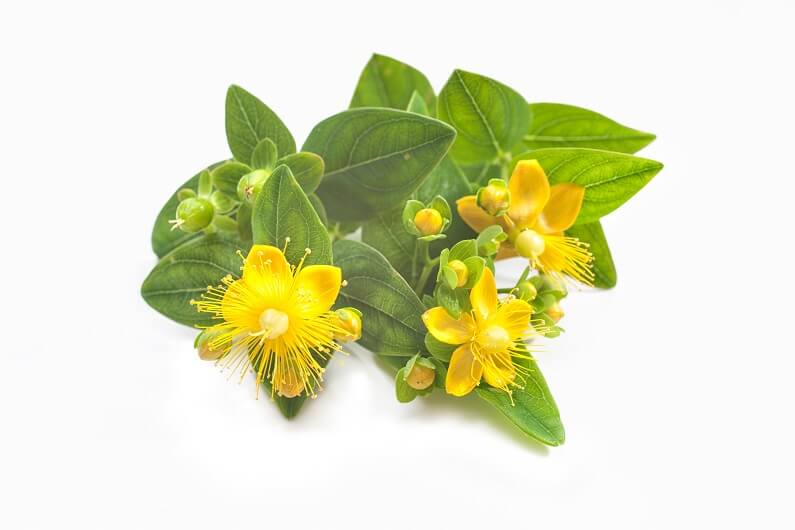 St. John’s Wort is said to be helpful in relieving mild to moderate cases of depression and, in fact, has been used for centuries to treat mental problems as well as help with nerve pain. It has sedative properties as well as anti-inflammatory properties and can also be used topically to help heal burns, cuts and insect bites. Today it is often used to help with sleep disorders as well as depression and anxiety.

You can buy this herb in capsule form, or drink it as a tea. When buying the herb, be sure you get the flowering tops and buy from a reputable source. The plant is shrub like and has clusters of yellow flowers and can be found growing all over the US as well as Europe and Asia. The element that makes it so effective is hypericin so if you are buying a powder, pill or tincture, you should make sure you get one that is standardized to have 0.3% hypericin.

There have been many studies done on the effectiveness of St. Johns Wort in relieving symptoms of depression and, in fact, this was once the most commonly purchased herb due to its reputation for relieving anxiety and depression. However, some recent studies have shown that the herb was only as effective as a placebo and some say its reputation as a depression reliever is unfounded. Be that as it may, if you want to use this herb you’ll need to talk to your doctor because it can interact with other medications.

This herb also may have promise in treating other problems. Laboratory studies showed that it was useful in fighting infections of bacteria that were resistant to antibiotics and there is some promise that it may inhibit the growth of the HIV virus which causes AIDS. Studies also show it might be effective in relieving symptoms of PMS as well as improving the mood of those that have seasonal affective disorder (SAD) when used with light therapy. Additionally, it can help heal wounds, burns and even hemorrhoids.

The side effects from St. John’s wort include hives or rashes, stomach ache, dizziness, mental confusion, headache and dry mouth. It can also make your skin sensitive to sunlight but this is rare. As with any herb, consult your doctor before adding it to your health regime.

What is St. John’s Wort?

Hypericum perforatum is also known as Hardhay, Amber, Guttiferae, Goat weed, Tipton weed, Klamath weed, and St. John’s wort. It’s a member of the Hypericaceae family. Even though most plants in this family have little or no medicinal value, St. John’s wort has been known as a medicinal herb for centuries with all parts being used. However, traditionally only the dried flowers are used in supplements.

Although native to Europe, Northern Africa and western Asia, this perennial plant was introduced in to many regions of the world and can now be found in meadows, dry pastures and alongside roadbeds virtually worldwide. Growing as high as three feet, this plant has a distinctive yellow flower with blackish looking pin-spots and yellow-green, oval shaped leaves.

St. John’s wort has had a long and fabled history. Used by ancient Greeks and Romans to ward against evil spirits, sprigs of the plant were place upon the statues of their gods. During medieval times, the Europeans used the plant to treat all forms of madness and thought the plant to have many magical properties since it blooms near the Summer Solstice.

It is believed that it’s blooming date is also responsible for the plant’s name since the bright yellow flowers are clearly present on June 24th, the feast day for the Saint John the Baptist. Early Christians traditionally gathered the plant on the feast day. Then soaked it in olive oil until the oil turned blood red – a phenomenon caused by the hypericum – which was thought to symbolize the blood of the martyred John the Baptist. On the eve of his feast day, the plant was also brought into the houses and placed under pillows or was cast into bonfires to ward off evil spirits. Often this red oil was used to bless crops. Thus, the plant is known as St. John’s wort. (Incidentally, wort is an English word for plant.)

The historical medical use of this plant is also well documented with the first written record referring to St. John’s wort in the first century AD. In his famous book on natural history, Pliny the Elder refers to hypericon, noting that “The seed is of a bracing quality, checks diarrhoea and promotes urine. It is taken with wine for bladder troubles.”

The next notable mention of St. John’s wort was buy Dioscorides, a Roman army surgeon, recommended drinking the herb in special liquids, “For it expels cholerick excrements.” in his medical text. He also recommended rubbing it on burns. Paracelsus, a medical authority of the Renaissance also wrote of using St. John’s wort to treat wounds. He was also the first to mention using it for psychotic symptoms which he called “phatasmata”.

Perhaps the most important writing on St. John’s wort came in 1630AD when Agelo Sala stated that St. John’s wort had an excellent reputation for treating illnesses of the imagination, melancholia, anxiety and disturbances of understanding. He wrote, “St. John’s wort cures these disorders as quick as lightening.”

However, even during these more enlightened times, medical fact and superstitious fancy were often blurred. One of the earliest compendiums of drugs, the Saltenitan drug list of the thirteenth century refers to St. John”s wort as herba demonis fuga, or the herb that chases away the devil. Another medical book published in the sixteenth century refers to the plant as Fuga demonum, or devil’s scourge, a term that was repeated frequently in the literature of the next several hundred years.

The use of St. John’s wort continued to spread, mostly through “wise women” and midwifes. There is even evidence that once this remarkable herb was introduced to America, the American Indians used it in the treatment of Tuberculosis and other breathing ailments.

Soldiers also knew the uses of St. John’s wort. Often Crusaders and, later, Civil War soldiers would collect the plant to use on battle wounds. Many soldiers’ journals record the use of a wine made with St. John’s wort that would steady the nerves.

However, the story was different for “established medicine”. For the three centuries after Sala’s writings the use of hypericum to treat melancholia was securely incorporated in German literature but was curiously absent from British and American literature, which stressed the superficial use of the herb for the treatment of burns and wounds. Perhaps this is why the plant fell into disuse by most European cultures during the 19th century, and is only now making a strong come back. Today, St. John’s wort is considered a legitimate alternative to many antidepressants. Though, in Germany, where its uses were never forgotten, it is prescribed twenty times more often then the popular pharmaceutical drugs Zoloft and Prozac.

Researchers are not sure how any antidepressant works. However, it is believed that the first step in most commonly used antidepressants is to influence the way in which nerve signals are transmitted from one neuron to another.

There are three neurotransmitters – serotonin, norepinephrine and dopamine. Serotonin is believed to be responsible for feelings of satisfaction and contentment while norepinephrine controls alertness and activation and dopamine mediates social interactions. All of these can be effected in people with depression. Thus, different medications differ by which neurotransmitters inhibit the re-uptake of. These differences affect their side effect profiles and their therapeutic effects as well.

Older tricyclic antidepressants affect many different types of receptors, including those that have nothing to do with depression, which caused several undesirable side effects. Prozac and Zoloft are forms of SSRIs, which affect serotonin re-uptake without affecting other neurotransmitters to any great extent. Another type that is commonly used in the United States is bupropion, or Wellbutrin. This antidepressant is thought to act more selectively on dopamine and norepinephrine. MAO inhibitors, like Nardil or Parnate, work by inhibiting the enzyme that breaks down the neurotransmitters. This increases the concentration of neurotransmitters. The problem with MAOI’s is that they inhibit MAO in parts of the body other than the brain. This causes problems in the bowels where the enzyme detoxifies chemicals contained in ordinary foods such as yellow cheese and red wine.

St. John’s wort is commonly thought to work in a similar manner as MAO inhibitors do. However, researchers in Frankfurt Germany found that St. John’s wort did not work as a MAOI to any significant degree. More exciting was a study conducted by Dr. Walter E. Muller and colleagues which found that an extract of St. John’s wort is capable of inhibiting serotonin, norepinephrine and dopamine without causing a significant change in other neurotransmitters. If these findings are correct, St. John’s wort works like both SSRIs and Wellbutrin but without the side effects that MAOIs have. In fact, many scientists now believe that this balance profile of neurotransmitter re-uptake inhibition may explain why people appear to suffer less sexual side effects with St. John’s wort than with other antidepressants.

The effects of St. John’s wort, as with all antidepressants, can take up to six weeks to become apparent. No one knows exactly why it takes antidepressants weeks to work since the effects on the re-uptake of neurotransmitters are immediate. Current thinking holds that this may just be the first in a cascade of biochemical steps necessary for reversing the symptoms of depression.

Although the hypericin content of St. John’s wort has been the center of much attention, it should be said that scientists are still not sure which ingredient is in fact “the antidepressant”. It is quite possible that the various compounds must work together in order to produce the beneficial effects of this herb. More study is needed before we can determine which components of St. John’s wort are necessary and which are not.

The following are compounds found in St. John’s wort:

The most common side effect is sensitivity to sunlight. It is recommended that fair-skinned people, in particular, avoid prolonged exposure to sunlight while taking this supplement.

Other, less common, side effects may include – constipation, upset stomach, fatigue, dry mouth, & dizziness. Taking the supplement with food may help protect against many of these side effects.

In the past, St. John’s wort was mistakenly classified as a MAO (monoamine oxidase) inhibitor. MAO inhibitors have several drug interactions that may cause high blood pressure readings.

The National Institute for Health released study results that found St. John’s wort to adversely interact with indinavir, a protease inhibitor used to treat HIV infection. In the NIH’s study, plasma concentrations of indinavir were effected by the concomitant administration of St. John’s wort.

St. John’s wort may also stimulate the rejection of transplanted hearts. From this new information, scientists believe that it is likely that St. John’s Wort works along a metabolic pathway (particularly one involving the liver). Thus, it may render such drugs as birth control less effective. If you are currently taking a drug that works along a metabolic pathway, you should consult your doctor before taking St. John’s wort.

If you develop a rash or have difficulty breathing seek immediate medical help for a possible allergic reaction.

To date, there have been numerous case reports and drug monitoring studies with more than 5000 patients on the efficacy and safety of standardized St John’s wort preparations.

As you know, there are hundreds of supplements and herbal products out there. It is overwhelming to choose a product that has all the essential ingredients and meeting the quality standards. We have done the research for you! We bring the following products from manufacturers that emphasize quality, good manufacturing standards and stand behind their products.